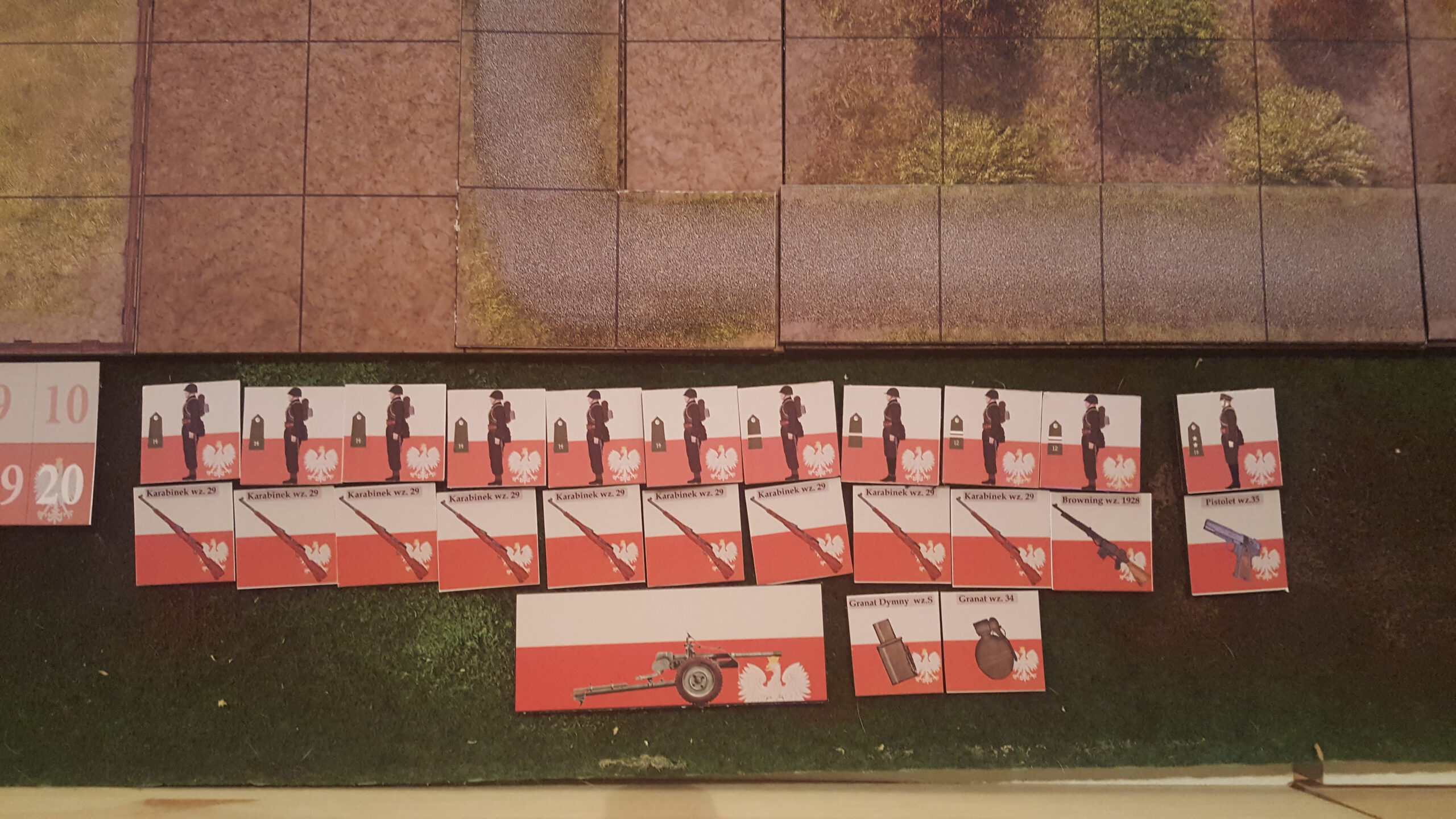 Assault Tactics is a print & play boardgame and tabletop rule set. The first chapter “Fall of the White Eagle” is set during Case White, the invasion of Poland. In the first playtest I decided to play the Polish and let the AI handle the invaders – which had me surrendered by turn 8. Shame on me for not even being able to beat my own game, and kudos to the AI wich more or less consisted of one printed piece of paper.

We played the scenario breakthrough where each side has to push through with at least three units to the board edge opposite to the starting position. Or make the opposition surrender by crippling its’ forces…which…ehm…happened.

Before turn 1 we rolled for starting positions. I had the western edge (left side for the less gifted) and AI scored northern edge. Combined with the river flowing through half of the gameboard that left me with exactly one corner to set up my forces in. Not a great start really, but at least almost all of my units were in hard cover or out of enemy line of sight.

The Germans had more luck and were able to secure vital strategic positions like the church at the riverbanks right from the get go. In all fairness to myself I have to admit, that he solitary rules give the AI an edge at the beginning. It may place its units in a significantly wider corridor. Maybe I was wrong to give it that kind of advantage after all.

While the Germans had an armored car, a SdKfz. 221 armed with a machinegun and operateda by an unexperienced crew, the Polish brought a supposedly nice counter the field – a Bofors 37mm anti tank gun. What could go wrong? Well…everything. I placed the gun in the open (I saw no other option at the time) and it took small arms fire right away. Expected but still shitty after all.

Both sides started with two elite infantry, two regulars and six conscripts (two of the German conscripts formed the unexperienced SdKfz. crew). Most of the Germans carried carbines, some of them grenades. One veteran sported a MG34 LMG, his veteran loader was with him. The loader carried a carbine but may not use it as long as he was fulfilling his duty to carry the bullet belt. Lieutenant Schulz had an MP38, which would proove to be deadly throughout the game.

The Polish only had one anti personnel and one smoke grenade. All except for one of the soldiers carried carbines, while the lieutenant trusted his pistol. (All is good if you can trust your pistol…harr harr). One veteran carried a Browning Automatic Rifle (BAR).

Despite the lower firepower vs infantry, the first kill would belong to the Polish. A poor German lad was spotted in the forrest to the north by the BAR gunner, who scored a deadly hit with the first shot. Let’s fuck them Krauts up – this our country!! (Fun fact on a side note: Polish and French like Kraut too.)

The fucking up would be done by someone else because the AI retaliated relentlessly. In the first turn it managed to kill off all crew members of the AT gun. Time to man that thing again…in theory at least. The gun fired only two shots for the whole game and missed both!! Maybe I should tweak the cost for that thing.

Scoring a double move on the AI-decision-die, the 221 managed to break through the enemy lines in turn 3, The AT gun was even more of a sitting duck at that point and could not even pivot to face the armored car, that had flanked the Polish. But being the tacitcian (cough) that I am I decided to smoke off the position of the AT gun. Breathe, you have to breathe, nothing is lost. Man that thing, pivot and shred the SdKfz to pieces.

By the next German action I figured out, that the smoke was not placed in a very clever way. It only concealed part of the guns position.

The peeps on the hill close to the river used the elevated position well. The German lieutenant and two soldiers fired constantly at the AT gun and everybody coming close to it. By turn six I had lost five men and only managed to kill two enemies.

At least I was able to keep the MG34 sitting in the church from firing for most of the game. My lads supressed it steadily and made it draw back because of a failed morale test, which was not supposed to fail at all. The AI had to roll 11 or lower on the D12 to pass and scored a surprising 12. Yay me!

Then the SdKfz. all over sudden went nuts and drove towards my position at full speed. It broke through the fence and smoke and sat right next to my AT gun. Clumsy move, maybe the AI was not so smart after all. Time to blow that thing up! A brave veteran hurled an anti personell grenade through the hatch of the turret leaving the crew frightened and supressed. Kills, I needed kills for #*$% sake. At least no activation for the armored car next turn. This is what being supressed does for the other side. Now I “only” had to turn the AT gun and shoot the car to pieces. Piece(s) of cake!

I could smell victory for the first time. Turned the AT gun…and missed at point blank range. Oh my -.- god. In the next German action a hail of bullets from the hill hit my lieutenant who had made a desperate charge towards the mission objective and found himself and his misguided subjects out in the open.

To make things worse the BAR had to draw back from its position leaving me with five soldiers, an abandoned AT gun (once again) and an injured lieutenant. Now I had to think about saving the rest of my men. (And that 3 hours had already passed and I was getting hungry). Surrender. But we will be back to fight another day – promise!

In hindsight I should have placed the AT gun behind the building and wait for the SdKfz. 221 to drive into my sight. That kind of ambush would have been a far better option. But learning the game is what playing the AI is for.

Here is a detailed look at the force specifics.