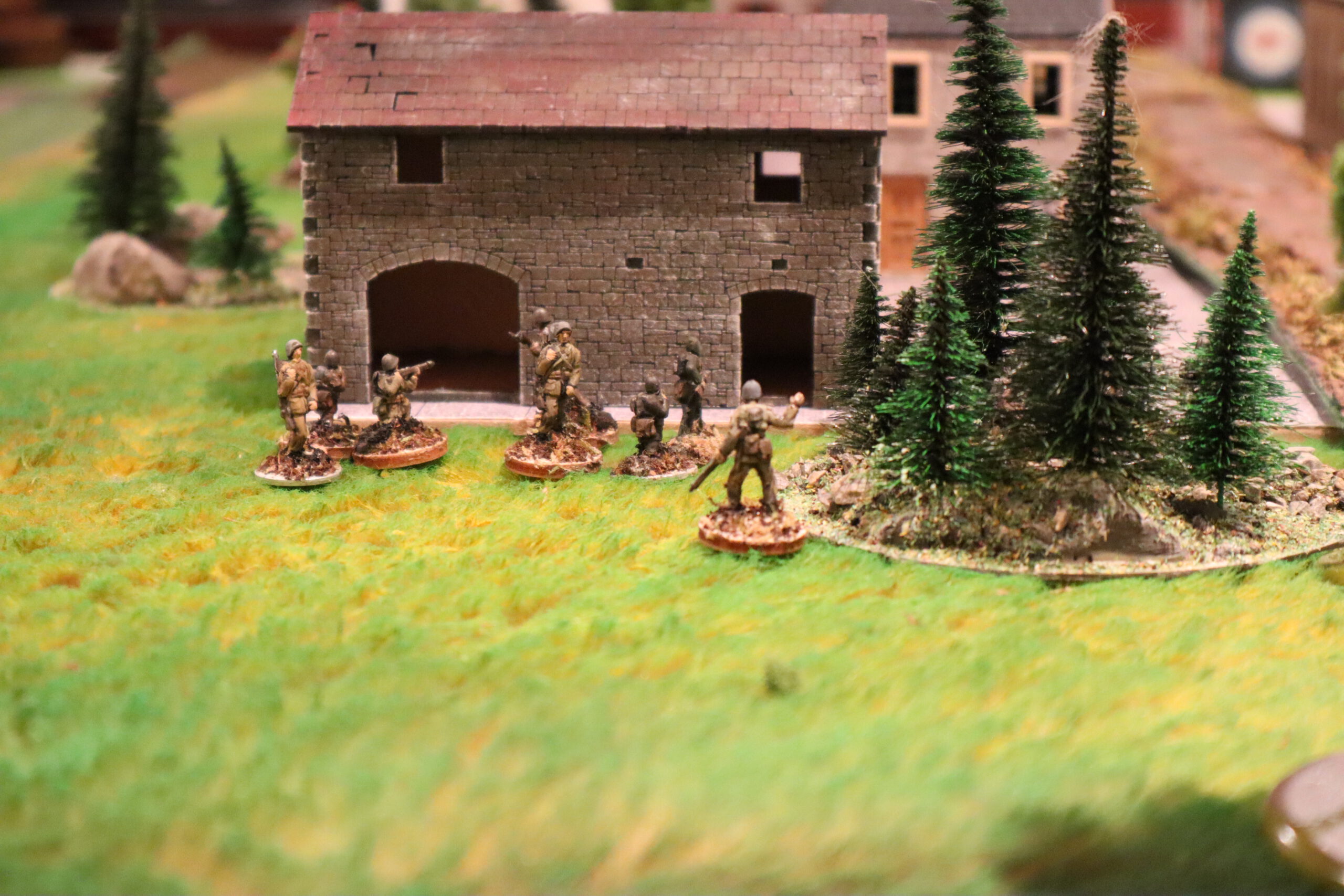 Yesterday, me (Chris) and one of the Tankettes (Alex) started off our first 2 player-coop campaign in Assault Tactics. The dice told us to play the Polish Cavalry doctrine, which is not a bad thing, because it can call in armored support. Also, the first scenario on the campaign ladder “Probing the enemy lines” was supposed to be a quick warmup game. To win this one we would have to advance on a town, located in Tuchola forest, and either clear one flank of enemy units or kill so many that the Germans would have to withdraw. The only way for our tanks into the town is blocked…

The game became a meatgrinder for our troops that lasted for four hours. The Germans clearly outmanned, outplayed and “outlucked” (pretty sure there is no such word) us. In the end, they won the game by scoring 20 points on the Kill Count, which is the maximum count for the first scenario on the campaign ladder. So, minor German victory right there. Only good thing about it: If the Germans had cleared one third of the map from enemy units, they would have scored a decisive victory.

First of all, we (the Polish) had to select additional units that would be support our core forces. Alex rolled a pretty high number which led him to opt for a Renault FT17 armed with a 7,62 mm Hotchkiss Machine Gun and a 7TP, clearly the pride of the Polish armed forces in 1939. It was fast and well armed. We were pumped up.

Then, my roll was pretty meager. I only had 14 additional points to spare and opted for a TKS tankette armed with a 20 mm gun plus veteran crew, which would give me a +1 on all attacks and morale checks. Also i (wisely) colleceted a smoke grenade.

Then we rolled for starting positions and found ourselves at the start of a “situation”. Our deployment sector was placed on the eastern edge of the map, dominated by a town in the middle. Nothing wrong with starting there, well, except for one bridge being the only way over that river. The one position out of four you not necessarily want to start from.

The Germans, one playing the infantry doctrine and the other the armor doctrine, were starting from the opposite edge of the table. They rolled high numbers on the additional points and brought (randomly drawn) extra conscripts, light machine guns, several SMGs, hand grenades, a Panzer I plus veteran crew and a mortar. But: No real anti tank weapons except for the grenades (also not really AT) and a Panzerbüchse 38 (AT-rifle) German armor rapidly advancing on the eastern part of the town.

Our plan was to cross the bridge fast and flank the enemy forces. And simply shred them to pieces. Let´s go!

Time to draw the random event and effect cards. The German armored section scored a Panzer Ace (making one of their tank crews veterans, okay, okay) and an Optics Upgrade (+1 for every attack by an AFV— REALLY???). The infantry player somehow drew Tank Traps and placed them right in front of that bridge (that deployment sector…ugh) How can you be so lucky to draw three tank related cards from a deck of 25?

Time to counter that with our own cards. Alex scored a Medic (heals 1 D6 of units and crew per game – he rolled a crappy 2 and forgot the entire game it was there) and Close Combat Training. That meant a +1 on all Close Combat attacks. But he never got really close, except for one, pretty much decisive time, when his soldier missed by rolling a 20 on the D20 (he had to score 16 or less) and the German conscript killing him right away – fun times!

Now things started to get even worse. I drew Rain and Mud (all movement of vehicles cut in half, lasts for 1D6 turns. Needless to say, it would last for 4 turns and not 2 or 1). Not exactly a good thing, when your plan is to go fast and crush the opposition right away. Our infantry was pretty much on its own throughout the game.

Oh, but the bridge was blocked anyways, which essentially meant, that our infantry that was able to deploy close to the town, was on its own. The next card “Traitors” told me that 1D6 of my men would turn against me. I rolled a 6. That meant pretty much half of the men I was going to lead into battle were fighting for the Germans now.

Still, we managed to put up a good fight. Luck on the dice wavered on both sides. The German armored section flanked the town on the eastern side, took out Alex’s AT rifle (pretty much the only defense against AFVs there) and went Berserk on all of Alex’s infantry units it could find. The 7TP was trying to help from the bridge, with mixed results because of a subpar firing angle.

After trying to shield the traitors – all located on the northern flank – off with a smoke grenade and blindly firing into the smoke, I had to charge the traitors before they could take out my tankette and my officer.

We clearly needed smoke in order not to get shred by..my own men, who turned against me.

Time for some close combat with my ranking officer leading the attack (not exactly a wise decision but in order to gain numbers I had no other choice), while the tankette opened fire on the turned veteran with the automatic rifle and the regular with the Marosczek AT-Rifle, located close to the river. Four traitors died, one got suppressed and the other one had to go on a tactical retreat because of failing a morale check. Take that, Hans! UUUUGGH!
Also, Alex managed to kill some of the Germans he was facing, and all over sudden our lead on the Kill Count jumped to 19:14. Victory was near despite the odds.

Alex engaged in closed combat (remember that conscript from the beginning? Yeah, he did not die and cost us the game). Okay 19:16, still not that bad, given the circumstances. But then the SdKfz 251, an armed and armored transport vehicle, racing down the eastern flank, was hit but not destroyed by the 7TP. As consequence it had to unload its cargo – 8 infantry men. One of them threw a hand grenade, placed it well and killed two of Alex’s regulars. That gave the Germans the exact 4 additional points on the Kill Count they needed in order to win the game.

The Germans will take 27 (20 Kill Count + 7 victory points for a strategic victory) into the next round. With these points they will be able to upgrade their core units. We will take 22 points (19 Kill Count + 3 points you gain despite defeat).

The next scenario on the ladder will be “King of the Hill”. Let’s hope for some more luck this time.