Assault Tactics AAR: Oh where have they gone?

Assault Tactics AAR: Oh where have they gone? 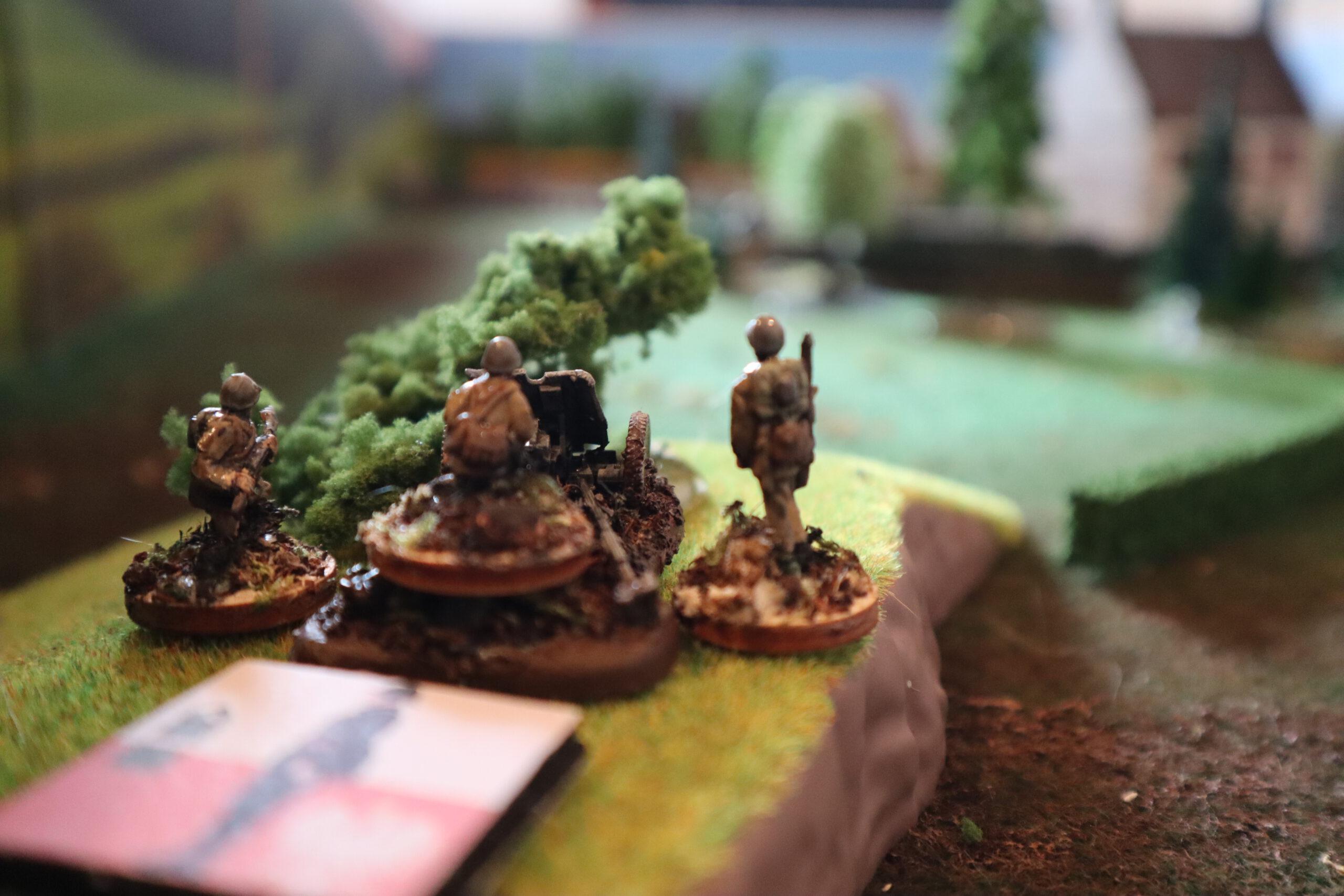 Once again I played some Assault Tactics in solo mode. This time I led a section of Polish cavalry and a deployment of German armor into battle. A (b)lasting experience so to say. The Germans started off with a Panzer 35(t) and 38 (t). Also a Panzer II Ausführung A and a Panzerbefehlswagen, a command tank, were involved. On their back a bunch of tank riders. Three of them armed with MP38s and almost all of them equipped with handgrenades. They expected close quarter fighting in order to fulfill the mission objective. You will find all of the force components below this article. A German Panzer 35(t) waltzes through a fence.

The Polish led by Podporucznik Bartosz Lewinski decided to make a run for the mission objective right away. They were counting on gaining initiative in turn one and set up a bulk of their forces on the road in the middle. The flanks were supported by a Bofors AT gun on the left and a Marosczek AT rifle as well as a Browning Automatic rifle making itself comfy in a small cottage. The Polish counted on the mobility of their horses on the road leading to the objective.

The plan was set and … blown to pieces by Leutnant Hubert Glaser and his men. The Germans gained initiative in three of the four turns the game lasted. Every turn started out with a group action. In the first turn Glaser gave out the move and fire order to all of his tanks. The Panzer 38(t) on the left flank rolled a 11 (60 cm on the board) and then fired a 37mm HE shell at Lewinski and his men.

Two of them died in the blast. One regular cavalryman was injured.  Lewinski was wounded and the rush for the objectiv broken off after a few minutes into the game.

In the same turn the Panzer 35(t) managed to kill all support crew of the AT gun with a lucky shot. The Poles in return could not land a single hit in their turn. The AT rifle failed at regular range. Also a burst from the Browning could not make the enemy tank pull back. Lewinski saw no other possibility than to take his command post behind the building where his men were covering the right flank.

Turn 2 started in the same fashion as the first turn. Glaser ordered another group action “Fire primary and secondary weapons”. The TK3 tankette that should have served as close fire support was one shot by the Panzer IIA. Though it was not that of a miracle due to the paper armor of the mini tank, the dice clearly were not with the Poles that day. To make the polish desperation perfect, the Panzer 38(t) took a shot at the only real AT threat (besides that AT gun) – a TP7 light tank. The shell only pierced the armor but the crew failed it’s morale check and bailed out.

In the polish turn… the AT gun (manned by only one brave cavalryman) and the AT rifle managed to score hits on the enemy tanks, killing two crew members. But that was about it.

In turn 3 the Germans – surprise – won the roll for initiative again. Glaser ordered two tanks to fire their main and secondary weapons at the depleted enemy position. The AT gun was once again completely abandoned. The Panzer IIA went for a double move and secured the objective.

Now the polish crew reentered the 7TP and fired at the Panzer 38(t) that was in close range now. The shot punched through the armor work and scared the crew so much it had to leave the vehicle.

All in all that was the last of the good news the Polish heard that day. The Kill Count (score for surrendered or killed enemy units) was at 21 : 4 for the Germans.

In the next turn the Polish finally gained initiative but clearly did not have any significant firepower left to stop the German advance. A shot from the AT rifle killed off another crewmember of the Panzer IIA, but still it sat there on the objective. Also the TP7 could not do any further damage. While the PII unloaded a salvo from the MG and 20mm autocannon into the cottage, where the last defenders remained. They died in this storm of shells and bullets.

Score 26 to 6 for the Germans. Also Glaser and his men completed the objective by holding it for one full turn. Major German victory.

Scenario description: Tuchola Forest, September 1939. Polish cavalry is trying to reach and evacuate a hidden weapon stache in the woods. German intelligence has discovered it as well. The race begins.

Scenario: King of he Hill. Whoever holds the stronghold for one full turn, will be victorious.

The Germans spend their Manpower for:

They spend their Equipment points on:

The Germans spend their Armored Support on:

Deployment notes: All German soldiers will start as tank riders

Special: 12 = gimme’ more (1 additional action for each unit for the length of one turn)

The Polish spend their Manpower on:

They spend their Equipment Points on:

The Polish spend their Armored Support on